Who is Charles Fey?

Charles Fey invented the very first slot machine in California in 1895. Similar coin machines already existed back then, but they usually imitated famous games like poker and they provided gums, drinks and cigarettes as prizes.

What is the Liberty Bell? 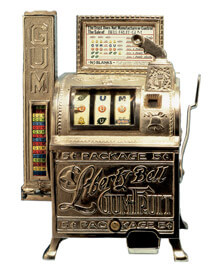 The Liberty Bell machine marked the start of a whole new gambling era - that of slots. Unlike the poker machines, though, the Liberty Bell gave out monetary prizes, which is why it became so popular and successful. This machine weighed more than 100 pounds and consisted of cast iron. Additionally, it was also the very first slot machine that used three reels with five symbols each: diamonds, horseshoes, hearts, spades, and, naturally, liberty bells.

Yes, there were only several symbols back then, and now, even Indiana Jones and Star Wars themes can be found on these machines. While the reels moved, the symbols rested on various reel positions. Whenever three good symbols appeared on the whole pay line, a player would get coins. Normally, a 50 cent payout would be given to Liberty Bell winners. Because of this popular design by Charles Fey, though, slot machines ended up using the classic concept of three reels for decades.

It shouldn't be surprising that these first slots got very popular in San Francisco right away. Charles Fey started up a workshop there where he kept working on newer slots, upgrading and modifying them. In fact, even despite the resolution of anti-gambling, Charles Fey kept making machines for years.

Liberty Bell became historical as the very first machine of slots. Today, the actual Liberty Bell machine stands in a restaurant and saloon in Reno, of which Fey’s grandchildren are the owners, preserving Fey's historical legacy in slot machines.