Charles Fey, a young San Franciscan engineer, invented slots. Because of his efforts, slot machines have become a phenomenon today. His very first machine became operational by 1894 and these early machines were placed into San Francisco gambling palaces by Fey himself, though it actually took a decade for his invention to get better. 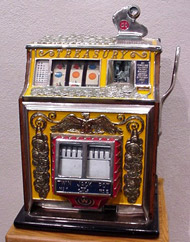 Fey's birthplace was Bavaria and he was born a poor man. Being the sixteenth child, he had hardly any hopes for the future. He eventually moved to America where he worked at an electric company in 1887. As if by fate, he met his partner there, Theodore Holtz.

They quit that job together and then worked together to invent the very first machine of slots. This machine was just like today's slots in a lot of ways, which just goes to show how perfect that device was. That same design was actually used for a century with hardly any change.

From Old to New

The earlier slots weren't very hideous, really. In fact, they looked like the slot machines today in a lot of ways, their size included. However, the symbols have changed. Fey's slots used card symbols of diamonds, hearts and clubs, as well as horseshoes and stars. There were three reels that spun after a coin was inserted and whenever the bell rang, that meant a good combination was reached. These bells were removed later on.

The first generation of slot machines is known as the New Nickel Slot Machines and they came out in 1887. Soon, they became very popular in San Francisco, which is around the same time Fey saw the massive potential of the invention. Fey ended up joining a company of Mills Novelty in 1907 and they used his designs to make the Liberty Bell of Mills. Several years later, an even newer version came out in the market called Operator Bell. These machines were heavy - more than 100 pounds - but at least 30,000 were constructed and sent all around San Francisco.

This company kept improving Fey's design. By 1915, they introduced lighter slot machines. They were also much quieter compared to the earlier versions, so they were called Silent Bells. The company put on bonuses like Double Jackpots onto them, as well as a lot of other innovations that are still put to use today. However, this was all done because on one young San Franciscan engineer's work, Charles Fey.